cmix is a lossless data compression program aimed at optimizing compression ratio at the cost of high CPU/memory usage. It gets state of the art results on several compression benchmarks. cmix is free software distributed under the GNU General Public License.

cmix works in Linux, Windows, and Mac OS X. At least 32GB of RAM is recommended to run cmix. Feel free to contact me at byron@byronknoll.com if you have any questions.

Compression and decompression time are symmetric. The compressed size can vary slightly depending on the compiler settings used to build the executable.

I started working on cmix in December 2013. Most of the ideas I implemented came from the book Data Compression Explained by Matt Mahoney.

The preprocessing stage transforms the input data into a form which is more easily compressible. This data is then compressed using a single pass, one bit at a time. cmix generates a probabilistic prediction for each bit and the probability is encoded using arithmetic coding.

cmix uses an ensemble of independent models to predict the probability of each bit in the input stream. The model predictions are combined into a single probability using a context mixing algorithm. The output of the context mixer is refined using an algorithm called secondary symbol estimation (SSE). 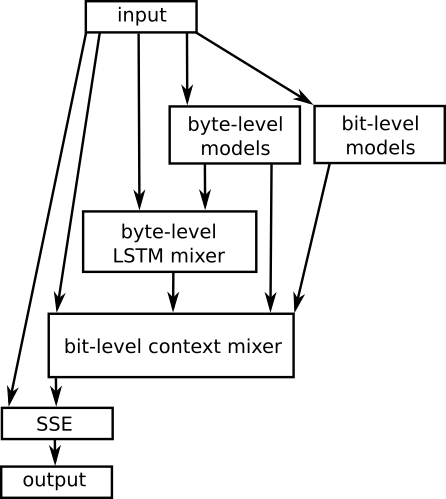 cmix uses a transformation on three types of data:

The preprocessor uses separate components for detecting the type of data and actually doing the transformation.

For images and binary executables, I used code for detection and transformation from the open source paq8pxd program.

I wrote my own code for detecting and transforming natural language text. It uses an English dictionary and a word replacing transform. The dictionary comes from the phda Hutter prize entry and is 415,377 bytes.

As seen on the Silesia benchmark, additional preprocessing using the precomp program can improve cmix compression on some files.

cmix v19 uses a total of 2,115 independent models. There are a variety of different types of models, some specialized for certain types of data such as text, executables, or images. For each bit of input data, each model outputs a single floating point number, representing the probability that the next bit of data will be a 1. The majority of the models come from other open source compression programs: paq8l, paq8pxd, and paq8hp12any. 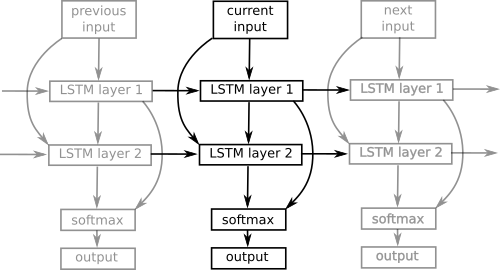 The byte-level mixer uses long short-term memory (LSTM) trained using backpropagation through time. It uses Adam optimization with layer normalization and learning rate decay. The LSTM forget and input gates are coupled. I created two other projects which compress data using only LSTM: lstm-compress and tensorflow-compress. Their results are posted on the Large Text Compression Benchmark.

cmix shares many similarities to the PAQ8 family of compression programs. There are many different branches of PAQ8. Here are some of the major differences between cmix and other PAQ8 variants:

Thanks to AI Grant for funding cmix.

cmix uses ideas and source code from many people in the data compression community. Here are some of the major contributors: